A few weeks ago I asked Tanner if he wanted to go camping for our one year anniversary. We don’t really have the financial means at this point to do something wild and crazy, but I wanted to go off on an adventure and  commemorate our first anniversary. Thankfully he was all for it.

I suggested a campground that I’d never been to, but had heard about. However, when Tanner called he found out that because we had to wait to leave till after work, we wouldn’t make it in time to check-in. The lady he spoke with recommended Blanket Creek Provincial Park.

We pulled in around 9:30 pm, and we were super impressed by what we saw in the dark- and even more impressed when we saw it in the morning. Each campsite was big and private, surrounded by lush green forest.

The campsite had a little man-made lagoon area with sandy beaches for swimming, or you could go right over the real lake- which was surrounded by beautiful mountains. There were even flush toilets and running water. Can’t get better than that.

We pulled a typical (or what’s becoming typical for us) Sherwood vacation, and kept everything pretty spontaneous. On Saturday we went exploring. We found an area called Begbie Bluffs. We really didn’t know what we were getting into…but we really lucked out.

First we climbed up to the bluffs, which were fun to climb around on and explore (and we saw some actual climbers in action)…and they were covered in beautiful moss.

Seriously…we couldn’t get over the moss. We were like those people that can’t stop taking pictures of their puppies…except for moss…bad analogy?

Then we hiked down towards the river to the Begbie Falls. Again, everything was so green! It felt like we were hiking through Middle Earth, or somewhere equally as magical.

It was so relaxing to get away from our crazy lives (life has felt extra crazy lately) and connect and talk about everything that’s happened in the past year, and everything we hope for in the future year(s). 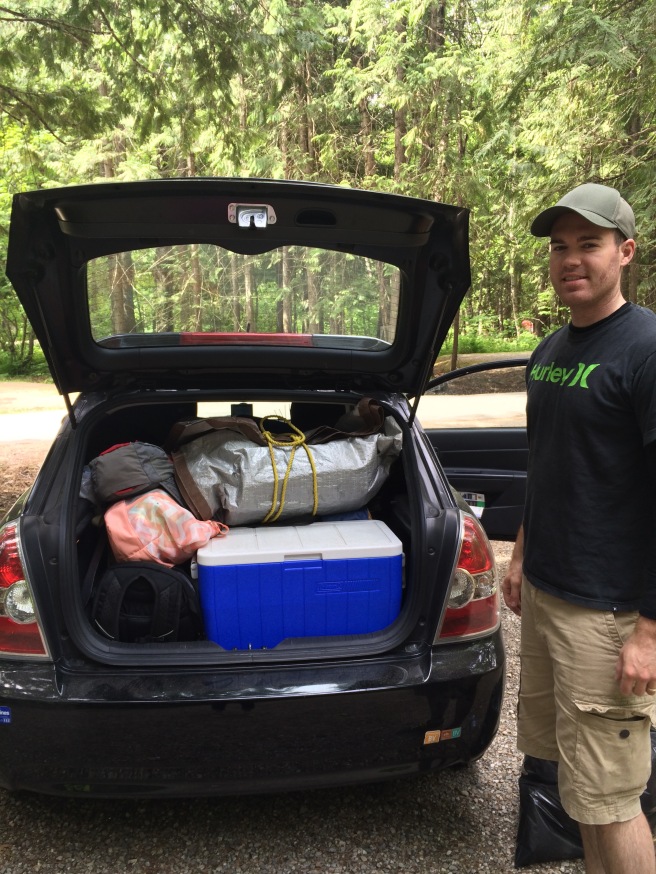 ^^Our poor little car was pretty packed with the camping gear. But it was a cool feeling to have planned, and survived, a little trip all on our own. It was a great way to celebrate a year of actually making it as real adults for a whole year.

On Sunday we packed up our little campsite, and then took the ferry across the lake to go to Halcyon Hot Springs. It was a just a half hour ferry ride, and then we spent a couple hours relaxing in their ‘healing waters’. Which I’m not sure if I buy, but there was something about the warmth and the minerals in the water, and maybe the romantic weekend with my husband, that made me down right relaxed. 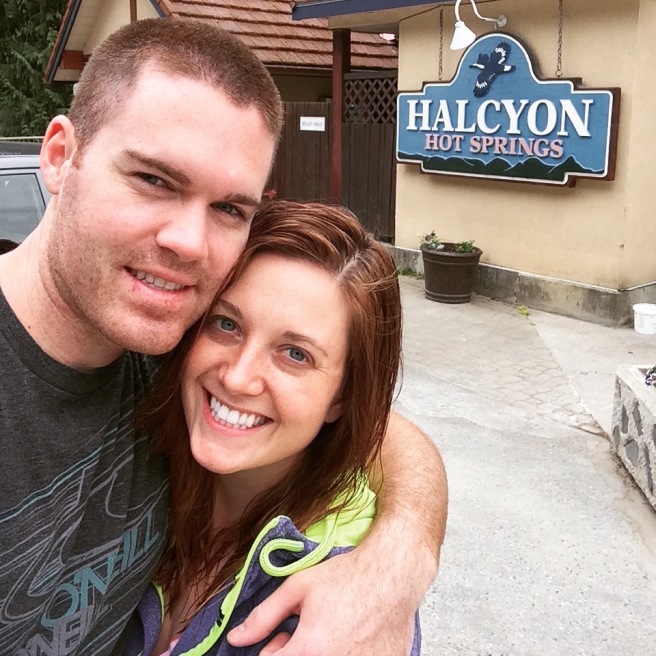 I really can’t believe we’ve been married for a whole year. In some ways it feels like we’ve just always been married, in other ways it feels like the year has flown by. I’m so grateful for each and every day I get to spend with Tanner. I’ve been happy before- but words don’t do so well at describing the joy that comes from being in a marriage and working and growing together to build the life you want.

I sure love you Tanner Sherwood, and can’t wait for all the future has in store for us. Happy one year!

One thought on “Celebrating 365 days of martial bliss”

Literally the most magical moment. Introducing Baby Brother to his VERY excited sisters. We’ve been talking about this moment for months, and it was so surreal seeing our girls love on Connor... and now that we’re home I have a feeling the obsession is only going to get more intense 😂 you are one loved little man Connor 🥰 📸: @rachelcampbellphoto
Baby Brother is finally here! After much anticipation, Connor Douglas Sherwood joined our family Monday morning at 2:01 am, weighing 8 lb 3 oz and measuring 20.5 inches long. He is perfection and we are so in love 🥰 📸: @rachelcampbellphoto
I think I won this year’s watermelon growing contest 😂 #40weeks... (and two days, but who’s counting 🙋🏼‍♀️) and feeling like a ticking time bomb
First week as a sunbeam! (Or as Sunday kept calling it, “sun-class). She loved it and apparently was reverent the whole time... we’ll see how long that lasts lol.
Looking back on this year and I can’t remember anything but being pregnant 😂 jk... this was also the best year with the girls so far. They have both come into their own little (or should I say BIG) personalities so much, and have become the sweetest little friends. I seriously have to pinch myself like 20 times a day when I watch them play together to remember that this is real life and they are MY babies. Can’t wait to meet this new little nugget that will probably dominate my camera roll over the next 12 months! Thanks for the memories 2019, you were so good to us.
Christmas morning the girls ran out to see what Santa brought them... didn’t even notice their gifts, ran straight for their stockings, and then proceeded to take out each individual item out of their stocking (ie each little piece of chocolate) and exclaim “wow!” “Look at this!”, and my favourite, Sunday would say “this is impressive!” 😂. Now we just need our final gift to be ‘delivered’ 😉🤰🏼🤱🏼 and our holidays will be complete...
Obligatory Christmas-church family pic. Kinda hoping these are our last family pics as a family of 4 😉 buuuuuut considering both girls were a week late my chances are low...
Sunday declared “I love Santa, he’s the best!”, Quinn said “Santa befst fwend!” (best friend) and I was just excited I didn’t have to be in (all) the pictures! Sunday asked for a Cinderella dress, and Quinn asked for candy in her stocking. Can’t believe it’s only 9 more days till we find out if these girls were nice enough to get what they asked for 😉
We have to go through a series of “make an angry/scary/sad/excited face” prompts before they will just say cheese and smile... but it’s always worth it in the end, and honestly I don’t mind all the other pictures I get too ...properly represents the remount of emotions I have to help them work through in a typical hour or so 😂
There’s a quote out there that says something to the effect of remembering that what you have now is what you once you dreamed for. I tell myself that when the kids are fighting, the house is mess, and I’m dead tired. But in those moments when the girls are giggling and playing in their own little world, or telling me the love me for thousandth time that day, and things are just good... I have to pinch myself to believe that I’ve been blessed with the things I used to wish for. Thanks @rachelcampbellphoto for capturing our crazy, wild crew in this season (right before we get a little crazier and wilder with #3 haha). I wouldn’t have life any other way than with with these 3 (almost 4) humans 💕
I’d be lying if I didn’t admit that this movie is one of the biggest events of our family’s year 😂 I legit cried and I don’t think Sunday moved or blinked once the entire movie... needless to say we approved
Told myself we couldn’t decorate for Christmas until the baby’s room was painted...but now that that’s done, it’s officially Christmas chez Sherwood 🎅🏼🌲
%d bloggers like this: