It’s been a while since I’ve blogged anything other than updates on Sunday. Which letsbehonest…she is my whole world (and my entire camera roll) now so that’s a pretty accurate reflection on our day-to-day life. But also this whole new role in life- one of a mother- has given me lots to think about. So I’ll attempt at forming some of those thoughts into a post. 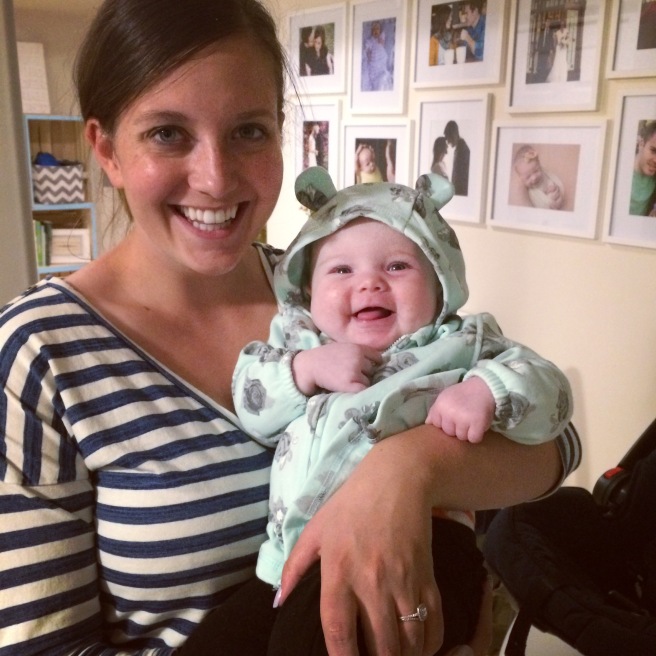 There is a lot about motherhood that you just can’t prepare for. One of those things that has shocked me the most, is this sense of being a part of a sisterhood. I’ve never felt like one of those *rah rah women* kind of people. It’s not that I’m against it…I just never felt passionate about celebrating being a woman…I just kinda figured it’s a fact of life. However, since having Sunday I feel like I’ve learned a lot about being a woman. My body literally has done things my husband’s can’t. I have instincts and feelings that Tanner just doesn’t relate to. It’s not that he’s unsupportive…it’s just that we’re different, us men and women folk.

Ever since becoming a mom, I have this new respect for women. Whenever I see a mom in the grocery store with 4 kids (or even just 2 for that matter) I just want to give her a high five and tell her she’s a rock star. Seriously…having one has been a crazy journey for me. One of the most wonderful things I’ve experienced since becoming a mother is the support from other women. When we first came home from the hospital and I had no clue how I was going to take care of a little person, let alone get off the couch next time I needed to go to the bathroom (or go to the bathroom for that matter haha…ah post-pregnancy life is treacherous for a few weeks there). But then my mom came and stayed for a week, and my mother in law dropped in with food, and friends texted and asked when they could drop off a meal or drop in and hold the baby so I could sleep. And all of the sudden, I was doing it…I was being a mother. Just not alone.

They say it takes a village to raise a child, but I’m grateful for the village that helped me become a mother. Not that I’m done becoming, but I’m past the first scary bit. So here’s my rah rah women babbling- thanks for taking care of me fellow women. Thanks for the tricks-of-the-trade, the reassurances, and the hand-holding. I promise to pass it on, if not to other mothers , at least to my own precious woman-in-the-making. The love and support has not gone unnoticed.

My hands have never been so full... but neither has my heart 😉 Happy Valentines Day 💕
1 MONTH: it’s been the longest and shortest month of my life haha. Connor has not been an easy sleeper (we spend our nights googling colic remedies... so that’s fun), to be fair he’s also had his first cold/fever/stuffy nose, which is heartbreaking and hasn’t helped the sleep situation. But he has been a good eater (as you can see haha) so there’s that lol. He loves to sleep being held, is spoiled rotten by cuddles and kisses by his sisters, and while I’ve never been more tired in my life, I love kissing and studying his sweet little face when I hold him. He is starting to coo and smile, and especially loves to chat with Sunday😍. He loves his swing and to be swaddled, and has mixed feelings about the soother and his car seat. We love you Connor-man!
The beginnings of coos and smiles and it’s making me equal parts smitten and sad that he’s changing already. Motherhood man, you can’t win.
Officially the Sherwood party of 5... FIVE! What?! Leaving the house feels like an Olympic event, I need about 8 more arms, and I would describe my general state of being as zombie. But the other night Quinn said in her prayer “thank you for baby brother having blue eyes and fingers” and despite being in survival mode, I’m so grateful for the 3 sets of blue eyes and little fingers that belong to our three beautiful children 🥰 📸: @rachelcampbellphoto
I love this cheeky little monkey of mine 🐵
In the past six days, I have accumulated approximately 8,367,826 pictures of this little man sleeping... and I’m not even mad about it 😍
Literally the most magical moment. Introducing Baby Brother to his VERY excited sisters. We’ve been talking about this moment for months, and it was so surreal seeing our girls love on Connor... and now that we’re home I have a feeling the obsession is only going to get more intense 😂 you are one loved little man Connor 🥰 📸: @rachelcampbellphoto
Baby Brother is finally here! After much anticipation, Connor Douglas Sherwood joined our family Monday morning at 2:01 am, weighing 8 lb 3 oz and measuring 20.5 inches long. He is perfection and we are so in love 🥰 📸: @rachelcampbellphoto
I think I won this year’s watermelon growing contest 😂 #40weeks... (and two days, but who’s counting 🙋🏼‍♀️) and feeling like a ticking time bomb
First week as a sunbeam! (Or as Sunday kept calling it, “sun-class). She loved it and apparently was reverent the whole time... we’ll see how long that lasts lol.
Looking back on this year and I can’t remember anything but being pregnant 😂 jk... this was also the best year with the girls so far. They have both come into their own little (or should I say BIG) personalities so much, and have become the sweetest little friends. I seriously have to pinch myself like 20 times a day when I watch them play together to remember that this is real life and they are MY babies. Can’t wait to meet this new little nugget that will probably dominate my camera roll over the next 12 months! Thanks for the memories 2019, you were so good to us.
Christmas morning the girls ran out to see what Santa brought them... didn’t even notice their gifts, ran straight for their stockings, and then proceeded to take out each individual item out of their stocking (ie each little piece of chocolate) and exclaim “wow!” “Look at this!”, and my favourite, Sunday would say “this is impressive!” 😂. Now we just need our final gift to be ‘delivered’ 😉🤰🏼🤱🏼 and our holidays will be complete...
%d bloggers like this: